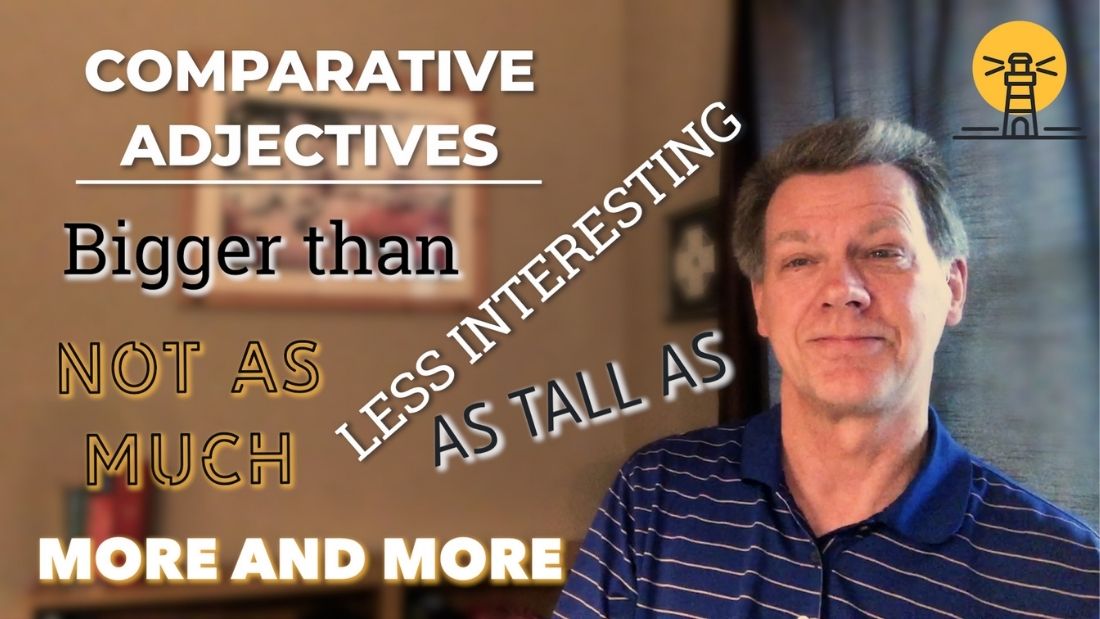 Do you get confused when comparing things in English?

You’re in the right place. We will break down the different ways to compare things in English so you feel confident about when to use -er, more, as ___ as, and “less and less.”

Adjectives are words in the English language that describe or modify nouns (persons, places, or things). They add an extra degree of description to someone, some place or some thing.

Comparative adjectives are used to compare the differences between the two objects they modify (larger/smaller, faster/slower, higher/lower).

So let’s look at some examples.

First, we can use the word “as” with a normal adjective to say two things are the same.

We can also use ‘not as’ to say two things are not the same.

We can say something is more than another thing by using the comparative adjective ‘than’.

• France is bigger than Scotland
• Luke is taller than Lucy.
• Your book is more interesting than my book.
Notice on the previous examples that some comparative adjectives are created by simply adding the letters ‘er’ to the end of the main or ‘root’ word. (big/bigger, tall/taller), but please know that the rule doesn’t apply to all words consistently. Some words require a modifier like ‘more’ or ‘less’ in order to form the correct sentence structure.

For example, you would not say:

My book is more interesting than your book.

We can make the comparison stronger or less strong by using ‘far” or ‘much’ or ‘ a lot’ before the adjective. Conversely, we can lessen it by using ‘a little’ or ‘a bit’.

• Canada is far bigger than Scotland.
• Amanda is a lot younger than Julie.
• Your book is much more interesting than my book.
• Scotland is a bit smaller than France.
• Lucy is less tall than Luke
• My book is less interesting than your book.

The last example of comparative adjectives will show how something changes over time. Here we use the repetition of the same comparative to indicate this change.

• That child is getting taller and taller.
• The climate is getting hotter and hotter.
• The city is becoming more and more crowded.

Notice the last example only repeats the modifier word for the comparative adjective.

For extra practice, make a sentence using one or more of the vocabulary words below.

How does Turkey compare to the United States?

How about the people? How do Turks compare to Americans?

The people in America are more diverse than in Turkey. But Turkish people are more hospitable than Americans.

Can you find American food in Turkey? Is it as good?

Yes, you can definitely find most types of American food in Turkey. Its often not quite as good, but more and more American-style restaurants are opening and so its getting better and better.

1) Comparative – (of an adjective or adverb) expressing a higher degree of a quality, but not the highest possible

3) Noun – (English grammar) a word that represents a person, place, or thing.

4) Objects –  (English grammar) a noun or noun phrase governed by an active transitive verb (often directly or indirectly receives the action of the verb) or by a preposition.

5) Root – Original words from which words have been made by the addition of prefixes or suffixes or by other modification.

6) Consistently – in every case, or on every occasion. Constant situation that does not change.

7) Modifier – a word that restricts or adds to the sense of another word.

8) Conversely – introducing a statement or idea which reverses or goes against an idea that has just been talked about.

9) Repetition – A thing repeated, when an action or event occurs again

Write 3 sentences using comparative adjectives in at least 3 different forms that were demonstrated in the video lesson.