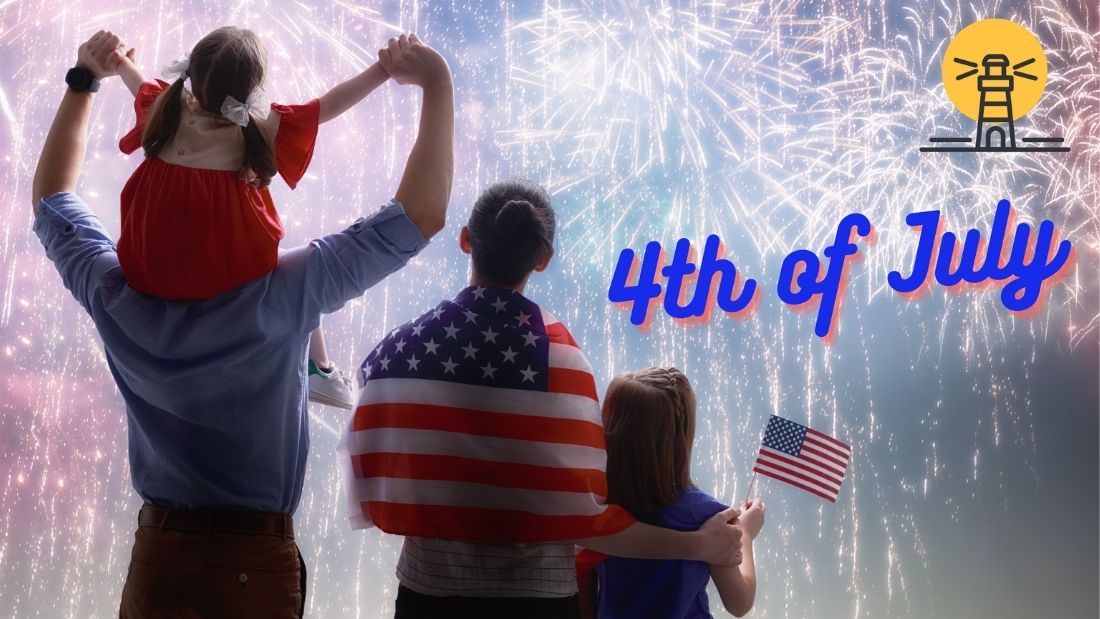 Independence Day is one the biggest holidays in the United States, and is the only US holiday also referred to by its date – the 4th of July. On July 4, 1776 the leaders of Britain’s colonies in America signed a document saying that they no longer wanted to be part of the United Kingdom but wanted to be their own nation, the United States of America. This document, which most school children in America have to memorize parts of, is called the Declaration of Independence.  On that day, America as a country was born.

And today, Americans celebrate it like a giant birthday party!  America is far from a perfect country, but on this day most people choose to celebrate the good things it has.  Big cities and town put on huge fireworks displays that night.  Many places hold a parade.  The parade usually consists of marching bands, floats representing different clubs or societies, clowns, and people dressed in patriotic colors. My favorite part as a kid (and, to be honest, probably also as an adult) was the floats and trucks that had people throwing candy into an audience. Everyone scrambles to pick up what’s being thrown.  Who doesn’t get excited about free candy?

In addition to the parade, there are usually free concerts and other public events, and lots and lots of food is eaten.  The 4th of July is usually a perfect day for eating watermelon and having a barbecue – people grill steaks and burgers and eat corn-on-the-cob.  Lots of families spend the day at the closest lake, boating, water-skiing, swimming and eating.  They may even set off fireworks of their own.

I grew up in a small village of 1000 people in Vermont, a small state that borders New York and Canada. Vermonters are proud to be part of the first new state to be added after America was officially a country. (There were thirteen before that.) The 4th of July was a big deal in my town.

Many events happen that day in our town.  One of the most unique is that the town holds an event at the local cemetery.  Each year, they pick someone buried in that cemetery from the earliest days of the town – 200 years ago – and they find out as much about that person’s life as possible.  Then someone performs as that person, talking about their life and what it was like to live in that time in our small town.  Lots of people come to spend part of the day watching the performance in the cemetery!  After that, they go to the field near the historical society building, where there is a barbecue, field games to play, people selling trinkets, and even sometimes actors hired to impersonate different important US Presidents.

But the highlight of the 4th of July is always the fireworks.  I worked for one summer in northern California, and I’ll never forget sitting on the shore of a beautiful lake, watching the explosions of green and red and blue and every other color, set against a 4200 meter high mountain that was still covered in snow!  It was breathtakingly beautiful.

So if you meet any Americans this July, on or close to the 4th of the month, be sure to tell them “Happy 4th of July!” or “Happy birthday, America!” They’ll probably laugh and appreciate your kind words.

1) Cemetery – an area of ground where the dead are buried, with gravestones marking the location of each person.

2) Declaration – a formal announcement or statement

3) Independence – the state of not depending on anyone else, and not having to answer to anyone else. An independent country rules themselves, and is strong and able to survive alone.

4) Breathtaking – when something is so shocking, or inspiring, or awesome that it is as if it takes your breath away. Usually, it’s just a metaphor, but sometimes a site actually makes you hold your breath while it happens.

5) Memorize – to commit something to memory, to know it word-for-word so that you an repeat it back without needing to see the words.

6) Societies – public groups that usually anyone can join. They are often built around a cause or a theme or common interest, whether it be making sure pets are treated well or preserving history.

7) Parade – a public procession, usually to celebrate a specific day

9) Impersonate – to pretend to be another person, either for entertainment or for crime. Usually the person pretending is trying to look, act, and sound as much like the person they are impersonating as possible.

10) Scramble – to move in a hurry, and probably clumsily, towards a certain goal or position. In this case, everyone is moving in a hurry and tripping over each other to get candy.

1) What is the 4th of July’s other common name?

2) The document that stated that British colonies in America wanted to become their own country, no longer under British rule was called the ___________ of Independence.

3) John’s favorite part of the 4th of July was the _________, the public procession where people throw candy from vehicles and the audience members standing along the road ________ to try to pick up the candy.

4) Does your country have a similar celebration to the 4th of July?