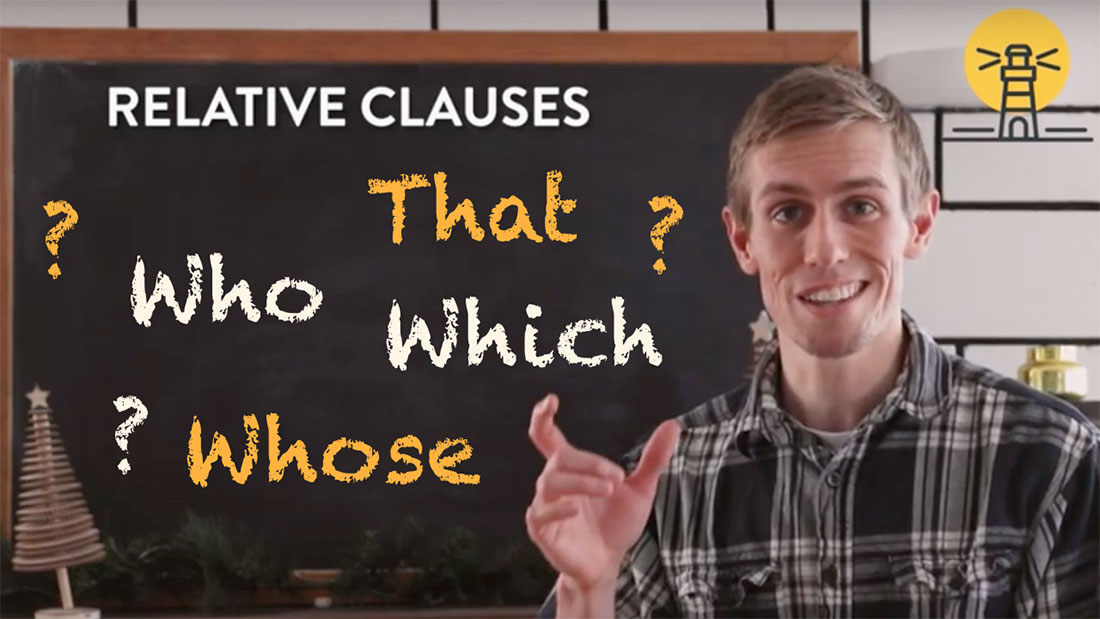 Relative clauses are clauses that begin with one of these relative pronouns:

who/whom, that, which, whose, where, when

1) Define or Identify the Preceding Noun

We mostly use them to define or identify the noun that comes before them. Here are some examples:

* There is also a relative pronoun whom, but we rarely use it in normal spoken English. It’s more seen in old English.It can be used as the object of the relative clause. For example: My science teacher is a person whom I like very much.

The preceding noun determines which relative pronoun you can use. “That” is the most widely used and you can often pick between who/that for a person, or which/that for a thing:

If the preceding noun is…

A person A thing

– This is a magazine article whose author ..

Note on where and when: The relative pronouns where and when are used with place and time nouns. Examples: Harvard is a school where students from around the world are educated. 2001 was the year when terrorists attacked the International Trade Center in New York City.

Note 1: Relative clauses which give extra information must be separated off by commas.

When You Can Leave Out the Relative Pronoun

There are two common occasions, particularly in spoken English, when you can omit the relative pronoun:

Sometimes it’s helpful to break up the sentence into two smaller sentences. That way you can see the main clause and the relative clause separated to determine whether the relative pronoun is the subject (can’t omit) or the object (can omit).

Do you know the man (who/m) he’s talking to?

Break it up: He’s talking to a man. Do you know him?

In this case, the man is the object of the sentence, so you can leave out the relative pronoun “who.”

But now try this sentence: Do you know the girl who started going to our school yesterday?

Break it up: A girl started going to our school yesterday. Do you know her?

In this case, the girl is the subject of the sentence, so we cannot leave out the relative pronoun “who.”

Present/Past Participle is in blue.

Auxiliary verb “to be” is in green.